Between 2003 and 2005 the original historic Goods Shed on this site was cut in half to accommodate the extension of Collins Street. Fragments of the building remained in the form of brick walls; these were incorporated into the final design.

A key goal of reintroducing built form beneath the bridge was to reconnect the two halves of the Good Shed, with a hub of activity which reinforces the length of Village St while providing a connection through to Aurora Lane.

Undercroft East was conceived as a simple destination for the immediate precinct – turning a dark and threatening ‘tunnel’ into an attractive place of retreat and warmth. This concept is supported by the use of lighting and natural finishes such as timber, while framing the existing heritage brickwork.

Stage 1 involved the excavation of the existing site and construction of a car park on the East side of Village Street. The car park was to service employees of the Collins Square building above. Stage 2 saw the addition of a new building and amenities on the East side, as well as an End of Trip (EOT) facility on the West side of the street. The new building is to house ‘Good Cycles’ – a bike service and supplies store which will support and interact with the EOT.

In addition to its ‘daytime’ functions, Undercroft East was designed as a potential generator for large street-based events capable of transforming Village Street into a lively and exciting place. 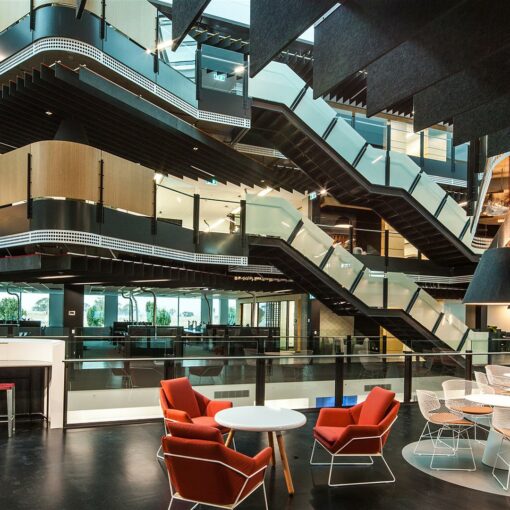