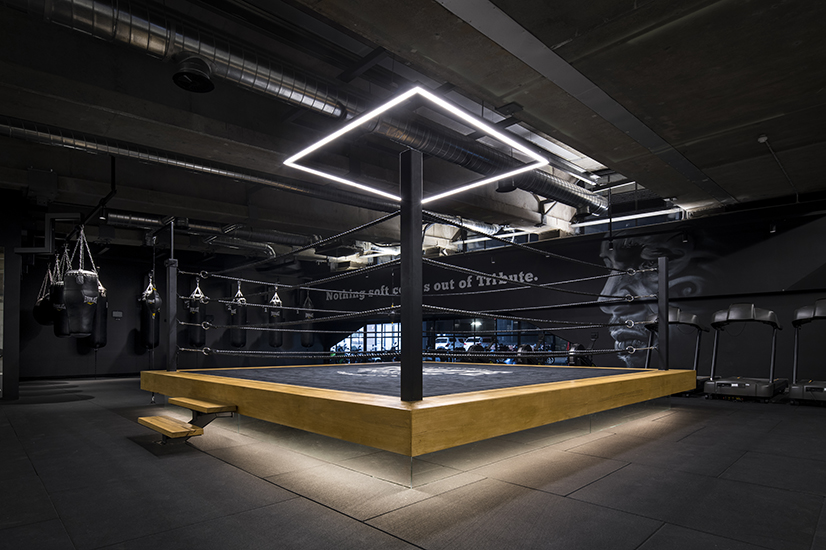 peckvonhartel was engaged by Walker Corporation to upgrade a previously unused space in the Undercroft of Dockland’s Collins Square. Tribute Boxing Gym, an up and coming fitness movement in Melbourne, moved into the site as their second location in the heart of the CBD. The project also marked the third and final project in a three-stage upgrade of the Village Street Undercroft, reinvigorating a hostile, derelict zone under Collins Street bridge with an End of Trip facility, Good Cycles bike shed, and Tribute boxing gym; all three were designed and delivered by peckvonhartel.

The primary challenge of the design was to organise a cohesive ceiling layout that was fixed and hung from detachable steel supports, attached lightly to the underneath of the Collins Street Bridge girders. In keeping with council guidelines, fixing directly into the bridge was prohibited, so an alternative method was designed which supported the entirety of the mechanical ductwork, feature lights and services. The resulting structural steel clamp allowed lighting and services to hang throughout the space without any effect on the bridge, at the same time achieving an excellent lighting solution in what is naturally a very dark space.

The brief outlined by Tribute Gym asked for a vintage, old school look for the space; mirroring the great boxing movies of the 80’s. peckvonhartel was able to achieve this with the use of timber highlights, matte black walls and equipment, and exposed ceiling services. This gave the gym a rustic charm, which complemented the look and feels of Tribute’s original gym in Abbotsford. The final piece to the puzzle was the design of the bespoke boxing ring. A recessed continuous mirror set back from a timber overhang gave the perception that the ring is floating, with a square feature light hanging majestically above. The central ring ties the space together, acting as the design centrepiece of the functional training space.